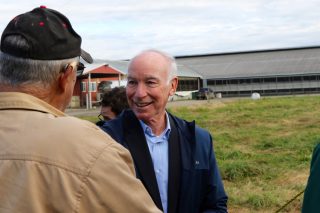 Since his election to the U.S. House of Representatives in 2006, Joe Courtney has served as an independent voice and tireless advocate for eastern Connecticut. Sent to Washington during the most trying economic period in a generation, Joe has fought to protect jobs in the region and to expand opportunities for Connecticut businesses.

A lifelong resident of Connecticut, Joe learned the value of public service firsthand from his parents, Bob and Dorthy Courtney. His parents met during their service in World War II for the FBI’s New York City headquarters guarding against enemy sabotage in the homeland. Growing up in a large family with four brothers, his parents always conveyed the importance of giving back to the community and striving to achieve something greater than himself.

After graduating Tufts University in 1975, Joe earned his law degree from the University of Connecticut School of Law in 1978. Following college, Joe served as a public defender in Vernon where he immersed himself in the local community and worked to connect clients with the tools to better their lives. After three years, he entered private practice and became involved with non-profit agencies to strengthen access to health care, job training, and education. He served as town attorney for Vernon and became very well versed in local government and its challenges to promote economic growth and lower taxes.

Joe’s introduction to public service came in 1986 when Democrats in Vernon sought a candidate for the 56th House District in the Connecticut General Assembly. Having helped in other local campaigns and already a known figure in the Vernon community, Joe was on everyone’s list as a strong and viable candidate for the 56th. After some exploration and many conversations, Joe launched his campaign and won.

A tireless, hard-working legislator, Joe was also recognized in a legislative poll in 1994 by Connecticut Magazine for his bipartisan efforts, and named the “Most Conscientious” and the “Democrat Most Admired by Republicans” by his peers.

In 1998, Joe ran for Lieutenant Governor. Though he did not prevail, he gained valuable experience in campaigning for higher office. With the insights gained from running for statewide office, Joe went on to launch a campaign to become 2nd District Congressman in 2002. Despite the unprecedented influx of Republican PAC money into the district earmarked for negative advertising, Joe came within a few points of the Republican incumbent.

In 2006, Joe ran for Congress again, hitting the trail hard and giving his all to show the constituents of the 2nd District why change was needed. After months of hard-fought campaigning, Joe was elected to Congress in the closest race in the country that year—winning an upset victory by just 83 votes. Nicknamed “Landslide Joe” by his new peers in the US House of Representatives, Joe did not take his close victory for granted then–nor has he since.

From his first day in office as the Congressman from the 2nd District, Joe has kept his focus squarely on the needs of eastern Connecticut. Joe’s first challenge was to reverse years of decline at the Electric Boat shipyard, which was on the verge of massive layoffs when he took office in 2007. He won a seat on the House Armed Services Committee and, working with Democrats and Republicans alike, secured $588 million to start building two new submarines a year.

Now Joe is the chairman of the influential Seapower and Projection Forces Subcommittee which oversees all submarine and ship construction programs—and the first Connecticut official to serve at this capacity since 1848 and a critical post for a region like ours.

Joe’s work, however, goes well beyond submarines. He’s been a leader in reducing the cost of college education, expanding vocational education programs to support our manufacturing sector, bolstering our region’s farmers, and supporting our veterans. A longtime advocate for improving access to affordable health care, he’s worked to lower the cost of healthcare by helping to pass legislation eliminating surprise medical bills, and has enhanced access to opioid and mental health treatment with federal appropriations for our region’s hospitals and clinical services.

He knows that getting things done means working together with Republicans. That’s why he’s ranked by the non-partisan Lugar Institute as Connecticut’s most bipartisan representative for his work with his republican colleagues.

Every day, people across eastern Connecticut wake up and go to work to support their families and their communities. From day one, Joe has promised to work just as hard every day as the people he serves-and he’s never forgotten that promise.

That’s why even in the face of unprecedented challenge and turmoil that our nation has faced during his time in office, Joe has remained committed to enhancing the quality of life for residents of the 2nd District. That’s why he opposed a Wall Street Bailout—despite pressure from his own party, he stood up for the middle class in the 2nd District and across the country. That’s why he’s fought hard for health care reform, historic improvements in infrastructure, and doing what it took to help our region survive the COVID-19 pandemic. And that’s why he will continue to do his part in improving the 2nd District so that future generations can reap the benefits of a better economy, education system, environment, and much more.

The title Joe holds most dear, however, is that of husband to his wife, Audrey, a pediatric nurse practitioner, and father to his children, Robert and Elizabeth. When he’s not traveling across eastern Connecticut or golfing, Joe can most often be found at home with his family, reading or watching the UConn Huskies and the Boston Red Sox.